I absolutely adore Rent the Runway, as I discussed. This outfit in particular was amazing. The first time I put it on, I felt so confident! This is a more professional/ workplace outfit was well, which was really helpful because I do not own enough clothing for work. I also have never had a pair of pants that I loved. These pants were the first ones that ever worked for me. The tweed top was also the perfect pattern for winter, or Georgia’s version of winter.

This outfit reminded me why I love fashion. I have been feeling really self conscious lately and have not had the energy to dress how I like, which is a never ending negative cycle. Looking bad makes you feel bad and continuing forever. But the power of clothes! This outfit made me feel so much better about just everything.

So here’s to breaking that cycle and putting in the energy to look nice, because it affects your entire outlook.

I have been really feeling the oversized coat style lately. I’m also never one to mix patterns, so wearing two different grid patterns is a big deal for me.

Thigh highs are also awesome to wear in winter so I was really excited to be able to find a situation to wear them. H&M thigh highs don’t sleep down as well which is nice.

And then of course my typical heeled boots that I wear. Heeled boots are perfect for winter (if you don’t live in a place with snow.)

“Clothes won’t change the world, the women who wear them will.” -Anne Klein

There have been a lot of strong women recently elected to congress. One of my personal favorites is Kyrsten Sinema. She was elected to the Senate as a representative of Arizona. She is the first openly bisexual women to be elected to congress. Not only did she make history because of that, but she is also a really accomplished women. She graduated high school as valedictorian at the age of 16. She got her B.A. from Brigham Young at 18. She also got her masters, J.D., and Ph.D.

The focus of this article is on her style though, which is interesting how that gets so much attention when she is such an educated and accomplished women. All of that is true, but she is making a statement with her choice in clothes. (And also this is primarily a fashion blog.) 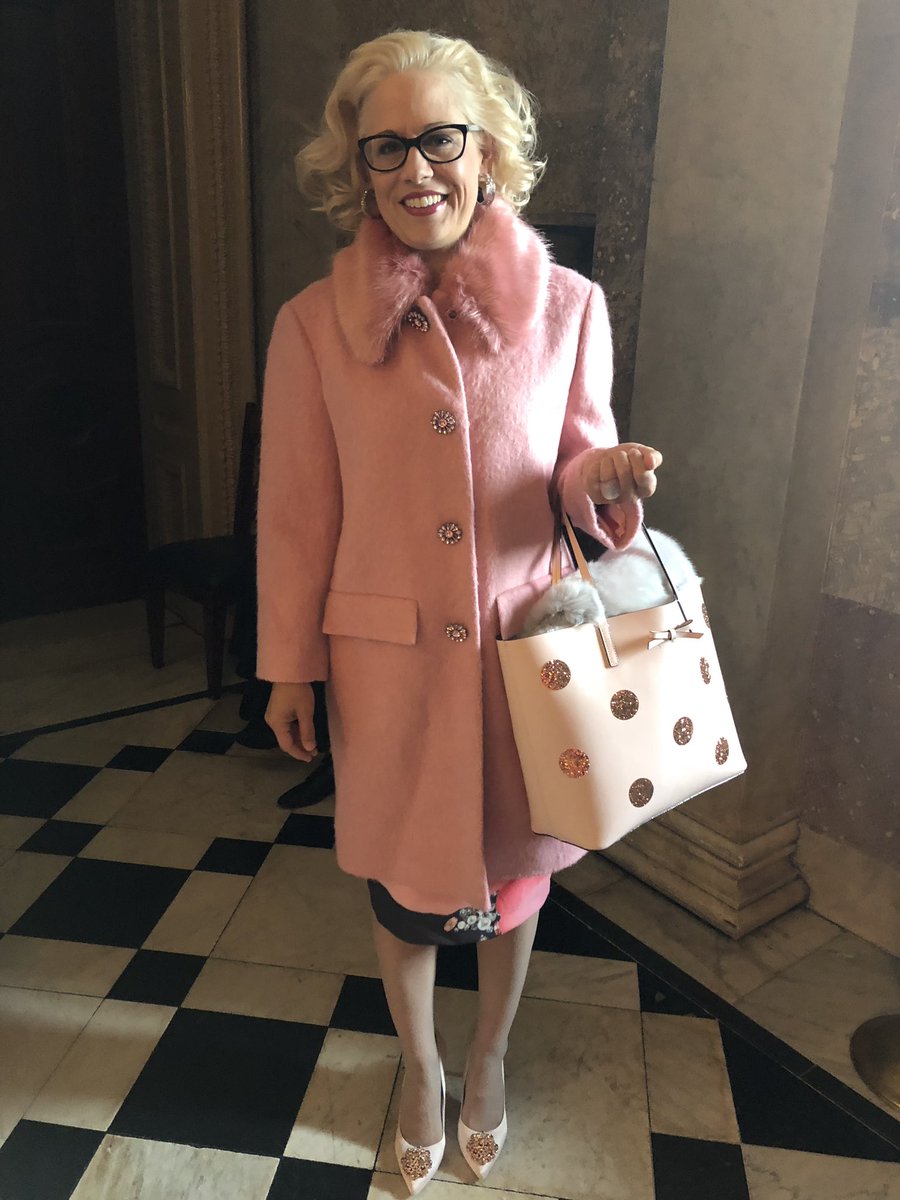 Here she is channeling both Elle Woods and Jackie O, some strong feminine icons, on her first day of congress.

Clothing is used to send a message. Most of the time we see politicians wearing dull colors and suites because that is what we expect of them and the colors do not raise attention or any flags. We associate this aesthetic with power.

What we see here is a women being openly feminine while serving in what has historically been considered a man’s job. Rather than adapting who she is and how she dresses to the position, she forces her colleagues and the public to adjust their point of view: that a women can be feminine and wear pink while also being a strong educated women to be taken seriously. We are seeing how the public perceives power changing and developing as more women take office. With this development, we will see colors, dresses, and more feminine clothing enter the political arena.

I will be featuring more women that are changing how we perceive fashion. This is part 1.

I recently started my rent the runway unlimited subscription. I cannot recommend this enough. It has completely replaced my clothes shopping. You pay a certain amount each month, which can be tough on a college student budget but you do not have to shop for clothes ever and you can pause or cancel at anytime. You keep a steady rotation of 4 designer clothes or accessories with your subscription. This has been really good for me because I am not someone who likes to repeat outfits. That is such a waste of clothing. With Rent the Runway I do not have to waste and I send them back and get new ones while the clothes also get to be worn by others! It is also perfect for switching your wardrobe up. I do not have a lot of professional clothes and so rather than having to buy a whole new closet, I rent profession clothes and keep my work life stylish.

I was able to rent this gorgeous coat from Rent the Runway on my last order. It is the best coat I have ever worn (well duh it is designer.) Very warm while also fashionable. Cannot recommend it enough. Also houndstooth is the perfect design for winter chic fashion.

I bought these heeled boots from H&M last week. I love these boots. They are high heeled but comfortable. I could wear them all day. They’re perfect to make any winter outfit automatically stylish with little effort. Heeled boots make people think that you tried.

The interesting thing about this outfit is that it is so simple. I work a black turtleneck, black skirt, black tights, black boots, and a coat. This is such an easy outfit to do with clothes you already own. The statement piece of this outfit is the coat. Everything else is simple to not overpower this huge coat. It is chic in the simplicity of it.

I also just really love this outfit and hopefully you do as well.